Based on the trend of high throughput and large bandwidth in data centers, server network adapters and access switches are evolving to next-generation 100G interfaces. The most direct difference between the next generation 100G interface and the current large-scale QSFP28 interface is the size. There are three standards for the next generation 100G interface: DSFP, SFP-DD, and SFP112. These three interface standards have one thing in common: they have a small mechanical size which is the same as SFP series transceivers. They can connect to a server under 48*100G on a 1U switch panel. Compared with SFP28, the port density is increased by four times, and the equipment cost and operation and maintenance costs are greatly reduced. 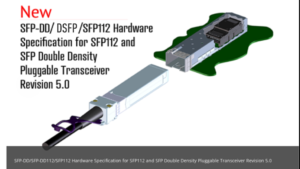 DSFP, SFP-DD, and SFP112 have little difference in appearance, but they are very different in specification parameters. The SFP112 uses the 100G lambda, which is limited by power consumption, and the 100G SerDes has not been widely used in switches and network adapter ports. Therefore, the SFP112 optical module and cable are not in demand yet. DSFP is more similar to SFP-DD in that it has two electrical channels, each running up to 26 Gbps with NRZ and 56 Gbps with PAM4, supporting total rates of up to 56 Gbps and 112 Gbps respectively. The main difference between them is in the number of pins. SFP-DD is doubled on the basis of the original SFP pins, with two rows of golden fingers (20pin->40pin). DSFP mainly uses the pins of SFP, and two pins are added on the basis of SFP.

Overall comparison, the DSFP structure is simple, connector design challenges are relatively small, and the female interface of DSFP will be much easier to do for devices. In 100G network, DSFP has stronger advantages and will be widely used. 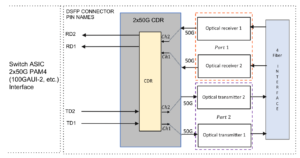 The newly released DSFP MSA standard (available for download at the DSFP MSA website: www.dsfpmsa.org) includes electrical, mechanical, and heat dissipation standards for modules and host adapters. It also includes connectors, cages, power supplies, and hardware I/O, as well as operating parameters, data rates, protocols, and supported applications. The DSFP Management Interface Specification (MIS) is currently in development and is a shortened version of CMIS(General MIS) developed by the QSFP-DD, OSFP, and COBO group. DSFP MSA aims to develop a 5G mobile application with SFP+/SFP28 compatible dimensions. DSFP has two TX/RX high-speed pin pairs, one more TX/RX pin pair than SFP+/SFP28. It is mechanically identical to the SFP+/SFP28 module and its host port is compatible with the SFP+/SFP28 module. The DSFP module does not have some of the hardware control and alarm pins of the SFP+/SFP28 module but performs the same function through I2C.

How to Use 100G DSFP AOC in 100G DSFP Network Adapter？
Based on cost, power consumption, and ecological considerations, Data Center Network (DCN) will skip 200G and go directly to 400G. From the perspective of optical transceiver architecture, both 200G and 400G adopt 4-lane architecture and PAM4 modulation mode, resulting in the single Bit cost advantage of 400G optical device compared with 200G optical module. From the perspective of optical module ecology, 400G modules have more types and options for customers. At present, the 200G module types are only 200G-SR4, 200G-FR4, 200G-2SR4, and 200G-LR4. And 400G module types are multiple, including 400G-SR8, 400G-DR4, 400G-XDR4, 400G-FR4, 400G-LR4, 400G-ER8, 400G-ZR, and other specifications.
From the perspective of Data Center architecture evolution, the ratio of the server NIC to the network rate is 1:4, that is, 25 GB NIC corresponds to 100 GB network, and 100 GB NIC corresponds to 400 GB network. In other words, 100G network adapter will be widely used in a 400G network environment.

For 100G network adapter, QSFP28 (4X25G) interface or QSFP56 (2X50G) interface is more used at present. Compared with QSFP28, QSFP56 supports PAM4 transmission, but the mechanical specifications of the port are the same, that is, if TOR switch and server use 100G to 100G direct connection, The connection density is too low, which greatly increases the device cost. If the TOR switch is connected to the server by 200G to 2X100G, the operation and maintenance will be difficult.
In this regard, Fiber Mall offers 100G DSFP AOC cables with high speed, high density, and high-reliability solutions fully adapted to 100G DSFP network card. Using an NVIDIA ConnecTX-6 DX chip and supporting up to two DSFP ports, the 100G network adapter is the industry’s most secure and advanced cloud network interface card to accelerate mission-critical data center applications such as security, virtualization, SDN/NFV, big data, machine learning, and storage. 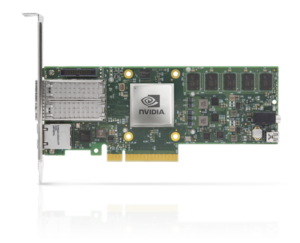