On April 23, 2021, the international standard of 50G PON was officially adopted at the general meeting of the 15th research group of the International Telecommunication Union (ITU-T SG15), which indicates that 50G PON has completed the standardization of basic functions. The 50G TDM PON is the new generation PON technology after 10G PON. It is expected that 50G PON will be put into commercial use in 2023.

The technology evolution after 10G PON is mainly reflected in the rating upgrade, which can be achieved by supporting 25G/50G or higher rates with a single wavelength, or 40G/80G/100G with multi-wavelength stacking. NG-PON2 adopts a time division and wavelength division multiplexing (TWDM) technology scheme, supporting 4×10Gb/s or more wavelengths stacked with WDM. However, the NG-PON2 standard was not supported by most operators after it was developed, and in addition the optical devices with adjustable multiple wavelengths have not been brought down to a commercially available cost.

In addition, it is understood that the 50G TDM PON and 10G PON coexistence evolution upgrades are using wavelength division coexistence technology. The capacity of the two generations of PON systems does not affect each other. It supports smooth upgrading by replacing ONU. The implementation methods can be divided into two schemes: MPM dual-mode (built-in wave combining component) and external wave combining.

The core technologies of 50G PON

The next-generation 50G PON will mainly develop in two directions: improving the single-wavelength rate or increasing the total rate through multi-wavelength multiplexing. The industry consensus is that the bandwidth of the next-generation optical access network will be increased to 50Gbps. How to simply and efficiently achieve that bandwidth upgrade has become a hot topic in PON research.

Currently, 50G PON can only use a small portion of wavelengths in the O band, which are not enough. The ITU-T has decided on some wavelengths and is still discussing the other wavelengths.

The ITU-T had considered a number of line coding schemes for 50G PON, including PAM-4, duobinary modulation, and NRZ code. Unlike GPON SFP, the 50G PON ultimately decided to adopt NRZ code that has the highest signal receiving performance, because the PON system requires a very high optical power budget.

The ITU-T has made clear the rate requirement of 50G PON, and supports a combination of symmetric and asymmetric rates, with one downstream rate and four upstream rates available.

The increase in the line rate of 50G PON reduces receiver sensitivity. To reuse the considerable ODN resources, receiver performance has to be improved. To lower the requirements of the specification for optical components, 50G PON uses the LDPC scheme for FEC.

DAW: A DAW can be a wavelength newly defined for 50G PON or one deployed for a PON system preceding 50G PON. It can be an independent upstream wavelength or a pair of upstream and downstream wavelengths. The DAW technology avoids opening a quiet window on the upstream wavelength, thereby eliminating the delay caused by the quiet window.
CO-DBA: The OLT learns about the upstream service transmission requirement of the ONU through the upstream equipment, and then allocates bandwidth to the ONU in advance. This mechanism reduces as much as possible the time for which the service data is cached in the ONU.
Shortening the bandwidth allocation interval: The interval between bandwidth allocations for the ONU is slashed, thus reducing the service data cache time in the ONU. Each T-CONT supports a maximum of 16 burst frames in a 125 us period.

The PHY components of 50G PON mainly include key optoelectronic devices such as optical transmitter modules, optical receiver modules, laser device drivers (LDDs), burst-mode TIAs, and clock-data recovery (CDR) chips. The OLT can use EML or integrated SOA-EML components as the transmitter module, and APD or integrated SOA-PIN components as the receiver module. The ONU differs from the OLT in that the ONU driver needs to support the burst function and that the ONU receiver does not require the burst-mode CDR feature. Experiments and simulations in the industry show that, by using a 50G EML transmitter and an APD receiver, 50G PON can attain a single-wavelength rate of 50Gbps.

There are three coexistence modes of 50G PON and traditional PON, namely: 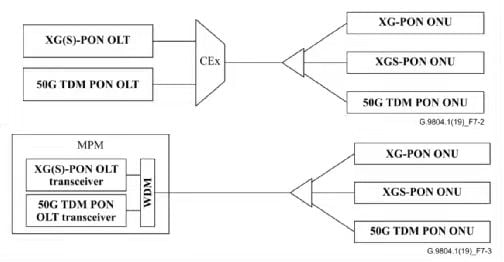 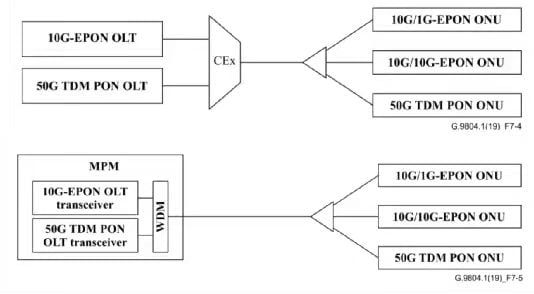 -Can avoid electromagnetic interference and lightning influence of external equipment

The common EPON transceiver in the market today are:

The common GPON SFP transceiver in the market today are:

At present, Avago, MACOM, Oclaro, Renesas and other companies have mature 25G NRZ lasers, which can be used for 25G PON. However, 50G PON transceiver is still in the research and development stage. Some companies have developed optical modules that can be used for 50G PON based on QSFP-DD800 and QSFP112 packaging. Others have developed 50G OLT by WDM and 50G ONU by SFP28 packaging based on CFP2 packaging and dual 25G scheme.