The combination of DWDM and routing technology is the key to the implementation of the 400G QSFP-DD DWDM optical module. In recent years, coherent DWDM products are ready to keep pace with the introduction of 400G DWDM coherent pluggable optical modules.

This paper will study the evolution of coherent DWDM technology, so as to further study the details behind the 400G DWDM coherent pluggable optical module, and explore how to realize the integration of DWDM and routing technology.

The development of DWDM coherent optics

In less than 10 years, the DWDM module has made great progress, optical devices become smaller and smaller, and the speed is higher and higher. It has increased 10 times in the same period of time: from 40G in 2011 to 400G. By 2022, 800G pluggable optical modules have already appeared on the market.

The introduction of coherent optical technology is one of the most important innovations in the development of the DWDM system. Coherent optical equipment uses advanced optical devices and digital signal processor (DSP) to send and receive complex lightwave modulation, so as to realize high-speed data transmission. At a very high level, coherent modulation remains the driving force behind high-speed optical devices, including 400G and higher rate coherent transceivers.

The first commercially available coherent DWDM system is 40G, followed by 100G. These systems are based on line cards and chassis. They can support many line cards in each system and occupy the same space as 10G rate products. It is major progress. Now they can transmit 100G rate and longer transmission distance. Over time, line card speeds have increased to 200G and beyond, but the industry is approaching an inflection point with the advent of cloud providers.

Specifically, as cloud provider networks begin to grow exponentially, there is increasing pressure on manufacturers to create smaller, faster and cheaper network components. It was this inflection point that led to the emergence of optical transponder DWDM systems. The optical transponder system eliminates the chassis and line card. It is a physically small stand-alone system, a small data center switch with a height of 1 or 2RU (1.5″-3″). The key to the feasibility of the optical transponder package is the separation of the two main components in coherent optical transmission: the optical device (laser, receiver, modulator, etc.) and the DSP (digital signal processor).

And these innovations have given rise to the pluggable CFP2-ACO (Analog Coherent Optics), a pluggable DWDM module with a relatively small CFP2 size. DSP technology is also evolving so that a single DSP chip can support multiple CFP2-ACO modules. Thus, by placing multiple DSPs in the optical transponder, manufacturers produced systems capable of transmitting 2Tbps (20x100G client connections) in 2 rack units (3″). In contrast, a chassis-based system would require 12 rack units. In addition to saving space, they are more energy-efficient. 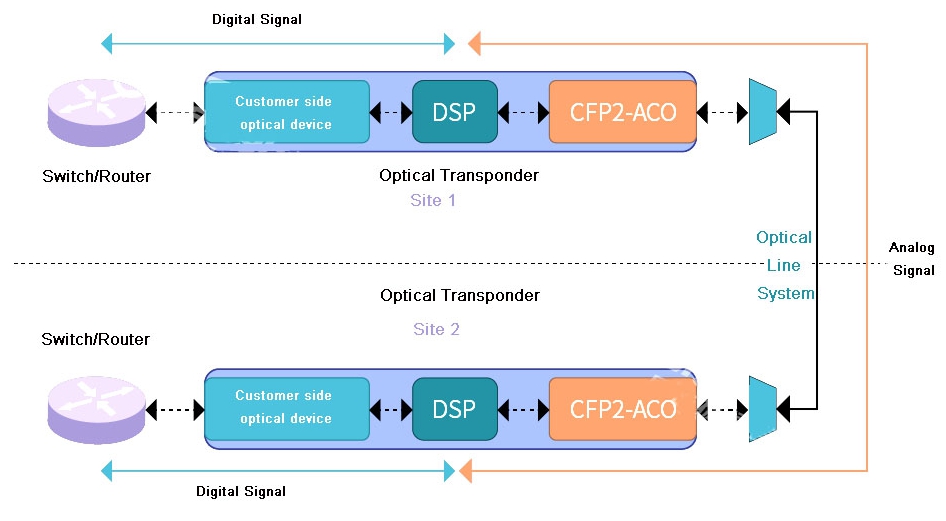 CFP2-ACO system has been widely used in the whole industry and has become the standard form of optical transmission in almost every cloud provider’s network.

At the same time, with the introduction of CFP2-DCO, pluggable coherent DWDM optics continue to develop. “D” stands for “digital” in digital coherent optics. The developers of coherent optics once again reduced the size and power consumption of components, so both optical devices and DSP are placed in CFP2. In this way, there is no need to use the rack to accommodate the DSP, so coherent DWDM transmission can be carried out directly from the router or switch, which is the turning point of the real integration of DWDM and router.

Now, coherent optical modules have evolved to 400G ZR and 400G ZR+ in QSFP-DD packages, using the same technology as CFP2-DCO but in a smaller size. Such a compact package housing 400G DWDM coherent optical devices do provide a viable solution for the convergence of routing and DWDM.

400G has evolved to the point where there are several standards. These include 400ZR, 400G ZR+, 400G OpenROADM, and 400G OpenZR+, which go in slightly different directions.

Eventually, between the two organizations and various optical device manufacturers, they agreed on the best standard for combining OIF and OpenROADM, and called it OpenZR+. By combining the characteristics of each device in the same package, a highly versatile coherent DWDM optical device can be provided, as shown in the figure below.