How to use EDFA in the DWDM system?

In recent years, in order to meet the needs of the expansion of communication capacity and the high functionality of long-distance transmission optical fiber networks, DWDM technology has been developing with the popularization of optical fiber trunk lines. The most powerful technology in the DWDM system is the practical application of the fiber amplifier. In the communication system, restricted by the conditions of fiber laying in the early days, it is complicated to transmit high-speed signals by one fiber. But it is easier to realize if the four-wave DWDM transmission of 2.5Gbps×4 is used. Therefore, the development of DWDM since the late 1990s has also promoted the progress of EDFA.

The schematic diagram is shown in Figure 1-1.

Optical amplifiers are devices that can directly amplify optical signals. After the optical signal transmits a certain distance along the optical fiber, it will be weakened due to the attenuation of the optical fiber, so the transmission distance is limited. In the early days of optical fiber communication, optical-electrical-optical regenerative repeaters were used to perform the photoelectric conversion, electric amplification, re-timed pulse shaping, and electro-optical conversion. In fiber-optic networks, when there are many optical transmitters sending light to multiple receivers at different bit rates and in different formats, traditional repeaters cannot be used, thus creating the need for optical amplifiers.

Compared with traditional repeaters, it has two distinct advantages:

2.2 How the amplifier works

The optical amplifier amplifies the incident light power based on the stimulated emission mechanism. The working principle is shown in Figure 2-1. 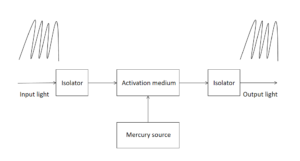 The active medium in the figure is a rare-earth-doped fiber, which absorbs the energy provided by the mercury source, makes the electrons jump to a high energy level, and produces a particle number inversion. The input signal photons pass through these activated electrons in the stimulated emission process, causing them to transition to lower energy levels, thereby producing an amplified signal.

Erbium-doped fiber is the core component of EDFA. It uses silica fiber as the matrix, whose core is doped with the solid laser working substance – erbium. In the erbium-doped fiber of several meters to tens of meters, the interaction of light and matter is amplified and enhanced.

In order to achieve more efficient amplification, most of the erbium ions are concentrated in the central region of the core when making erbium-doped fibers. That is because, in the optical fiber, the optical field of the signal light and the pump light is approximately presented as Gaussian distribution– the light intensity is the strongest on the axis of the fiber core. The erbium ions in the paraxial region will make the light and matter fully interact, thereby improving energy conversion efficiency. 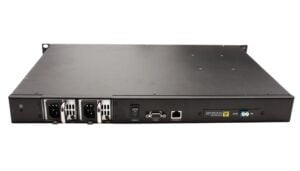 A typical EDFA mainly consists of the following parts: 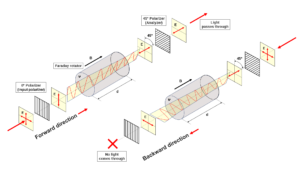 Faraday isolator allows the transmission of light in only one direction

2.3.2 working principle of the EDFA

The gain flatness refers to the relationship between gain and wavelength. The desired EDFA should have a relatively flat gain in the operating wavelength range we need, especially when used in the DWDM systems, it is required to have the same wavelength for all channels. gain. However, it is not easy to achieve the ideal gain flatness of erbium-doped fiber, the core component of EDFA.

In order to obtain a relatively flat gain characteristic and increase the bandwidth of the EDFA, there are two methods:

There are two methods to circumvent these limitations:

3.1 The working principle of DWDM

In the long-wavelength band, the optical fiber has two low-loss transmission windows, namely the 1310nm and 1550nm windows. The wavelength ranges of these two windows are 1270-1350 nm and 1480-1600 nm, corresponding to the spectral widths of 80 nm and 120 nm, respectively. However, for the high-quality 1550nm light source used in the current optical fiber communication system, the maximum output spectral line width after modulation does not exceed 0.2nm. Considering the wavelength drift caused by aging and temperature, it is reasonable to give a spectral width margin of about 0.41.6nm.

3.3 Main features of the DWDM technology

In a DWDM system, when there are multiple wavelengths of signal transmission, the repeater will not work. It is necessary to demultiplex first, and then repeat the processing for each wavelength, which will result in a very large and complex repeater. This is an important problem that restricts the development of DWDM technology. So an erbium-doped fiber amplifier EDFA can be introduced. Since EDFA has a high gain in the bandwidth range of about 35nm near the low-loss transmission window of 1550nm of the fiber, it can simultaneously amplify multiple lightwave signals online to compensate for the weakening of the signal in the fiber, without the need for optical-to-electrical and electrical-to-optical conversion. Therefore, it solves the problem of multi-channel signal amplification in the DWDM system and replaces the repeater.

The following three points must be paid attention to when applying EDFA in the DWDM system:

When EDFA is only used to amplify the signal of one wavelength, it has good amplification characteristics. However, when multiple wavelengths enter the EDFA, some signals will have high gain while others will have low gain due to the uneven gain. When multiple EDFAs are cascaded, the power difference will be amplified, which not only leads to the different signal-to-noise ratio of each channel on the receiver but also may cause the signal power reaching the receiver to exceed the dynamic range of the receiver and cause the malfunction of the receiver. 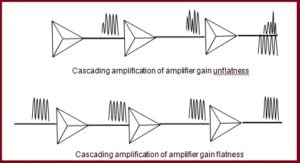 Here are two ways to equalize this unevenness:

① Pre-equalization: The power of each channel is pre-set to different values at the optical transmitter end, and the power of the channel that will get high gain in the amplifier is set to low power, otherwise, it is set to high power.

②Add a well-designed filter to the EDFA module, so that its pass-band characteristic just compensates for the uneven gain of the amplifier, so as to achieve the purpose of flattening the amplifier gain.

One of the core components of this optical amplifier for DWDM is a filter that can flatten the gain of the amplifier. The filters used at this stage are mainly multilayer dielectric thin-film filters and fiber grating filters. The loss characteristics of such filters are usually fixed. In this way, when the EDFA is applied in the system, its gain flatness can only be guaranteed under certain operating conditions, and the gain is not flat under other conditions.

In the actual system, when some channels suddenly fail or drop or add/drop at network nodes, the input power of the EDFA will suddenly increase/decrease, resulting in a transient change in the gain of the EDFA. The gain that other channels are obtained from the EDFA will decrease or increase, eventually resulting in a transient change in the power of those channels that remain on the fiber link reaching their respective receivers, which is called a power transient. 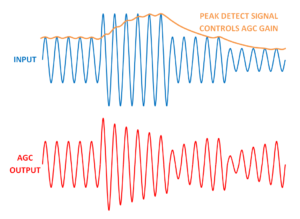 When the EDFA is cascaded, the ASE noise of the previous stage as a signal is input with the real signal to the next stage of EDFA and is amplified. The ASE noise accumulates, causing the degradation of the system’s signal-to-noise ratio. Therefore, when applied in a DWDM system, the noise figure of EDFA must be as small as possible.

This article introduces the structures, working principles, and applications of EDFA and DWDM technology. EDFA solves the problem of multi-channel signal amplification in the DWDM system. Thanks to the maturity and commercialization of EDFA technology, the DWDM technology develops rapidly and is applied. If there is deeper research on optical fiber communication, Fiber Mall will continue to publish articles to inform you.

< PreviousWhat is Coherent Optical Communication?
Next >25G vs. 50G vs. 100G technology
Scroll to Top