How does wavelength division multiplexing(WDM) work?

WDM is a technology that converges multiple optical signals of different wavelengths through a combiner and couples them into the same fiber for data transmission.

To put it simply, we can think of WDM as a highway——where different types of vehicles rush in and then go their separate ways when they get to their destination.

The advantages of WDM technology:

WDM technology has been developing rapidly in recent years because of the following advantages.

(1) Large transmission capacity, which can save valuable fiber resources. For a single-wavelength fiber system, a pair of fibers is needed to send and receive a signal, while for a WDM system, only one pair of fibers is needed for the entire multiplexing system, regardless of the number of signals. For example, for a sixteen 2.5Gb/s system, a single-wavelength fiber system requires 32 fibers, while a WDM system requires only two fibers.

(2) Transparent to all kinds of service signals, it can transmit different types of signals, such as digital signals, and analog signals, and can synthesize and decompose them.

(3) There is no need to lay more optical fibers or use high-speed network components during network expansion. Any new services can be introduced or capacity can be expanded only by changing the terminal and adding an additional optical wavelength. Therefore, WDM technology is an ideal means of expansion.

The optical transmission network based on WDM technology, with an add-drop multiplexing function and cross-connect function, has great advantages such as easy reconfiguration and good scalability. It has become the development trend of the high-speed transmission network in the future. But before it can be realized, the following problems must be solved.

But so far, the relevant operation and maintenance software are still immature. In terms of performance management, WDM systems use analog methods to multiplex and amplify optical signals, so the commonly used bit error rate is not suitable for measuring the quality of WDM services. A new parameter must be found to accurately measure the quality of service provided by the network to users. If these problems are not solved in time, it will hinder the development of the WDM system.

Since WDM is a new technology, its industry standard is relatively rough, so the interoperability of WDM products in different businesses is poor, especially in the aspect of upper-layer network management. In order to ensure the large-scale implementation of WDM systems in the network, it is necessary to ensure the interoperability between WDM systems and the interconnection and intercommunication between WDM systems and traditional systems. Therefore, the research on optical interface equipment should be strengthened.

The immaturity of some important optical devices such as tunable lasers will directly limit the development of optical transmission networks. For some large operating companies, it is already very tricky to deal with several different lasers in the network, let alone dozens of optical signals. In most cases, 4 to 6 lasers that can be tuned in the entire network are required to be used in an optical network, but such tunable lasers are not yet commercially available. setup of a tunable laser

At first, the technical conditions were limited, and the wavelength spacing would be controlled within tens of nanometers. This type of WDM is called Coarse Wavelength Division Multiplexing(CWDM).

Later, the technology became more and more advanced, and the wavelength interval became shorter and shorter. It was called Dense Wavelength Division Multiplexing(DWDM) when it reached the level within a few nanometers.

In addition, CWDM modulated lasers use uncooled lasers, while DWDMs use cooled lasers. Cooled lasers are temperature tuned and uncooled lasers are electronically tuned. It is difficult and expensive to implement temperature tuning because the temperature distribution is highly non-uniform over a wide range of wavelengths. CWDM avoids this difficulty and thus greatly reduces the cost. The cost of the entire CWDM system is only 30% of that of DWDM. CWDM is achieved by combining wavelengths transmitted in different fibers into one fiber for transmission using an optical multiplexer. At the receiving end of the link, the demultiplexer is used to send the decomposed wavelengths to different fibers and then to different receivers. 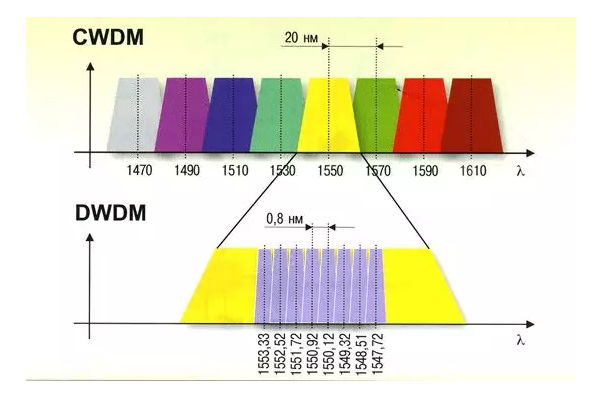 DWDM is commonly used in C-band, with a wavelength interval of 0.4nm and a channel frequency interval of 50GHz.

Other differences between CWDM and DWDM:

CWDM system does not contain OLA, namely Optical Line Amplifier. In addition, since the CWDM channel spacing is relatively large, there is no need to consider power balancing compared to DWDM.

The operating cost of an optical transmission system depends on the maintenance of the system and the power consumed by the system. Even if the maintenance costs of both DWDM and CWDM systems are acceptable, the power consumption of a DWDM system is much higher than that of a CWDM system. In DWDM systems, with the increase in the total number of multiplexed wavelengths and single-channel transmission rates, power loss and temperature management have become key issues in circuit board design. Lasers without coolers are used in CWDM systems, resulting in low system power consumption, which is beneficial for system operators to save money.

A summary comparison of CWDM and DWDM：

Nowadays, the 5G network is blooming. When the Communications Service Providers (CSP) build a 5G fronthaul network, they always fall into a dilemma: if they choose the more active WDM with higher operation and maintenance efficiency, the cost will increase; If we choose the low-cost passive WDM mode, it is difficult to improve the operation and maintenance efficiency, and it can not match the business needs in the future. Therefore, CSPs hope to find a way to deploy a 5G fronthaul network to realize both cost and operation efficiency. In this case, open WDM was born.

The principle of MWDM(Medium Wavelength Division Multiplexing), is to focus on using the first 6 waves of 25G CWDM, by adding TEC (Thermal Electronic Cooler) for temperature control, then left and right offset 3.5nm wavelengths to form 12 wavelengths, this solution can save a lot of fiber resources.

Then about LWDM(Lan Wavelength Division Multiplexing), LWDM is Ethernet channel-based wavelength division multiplexing (LAN WDM), with a channel spacing of 200 to 800 GHz, a range between DWDM (100 GHz, 50 GHz) and CWDM (about 3 THz).

The internal structure of an optical module