Among them, the PM-QPSK transmission system using coherent receiving technology is the most recognized by the industry. Various impairments in the channel, such as chromatic dispersion, PMD, carrier frequency, and phase offset, can be flexibly compensated in the electrical domain and reconfigured in signals by the PM-QPSK system receiver using digital signal processing (DSP) technology. Therefore, PM-QPSK combined with coherent detection provides the optimal solution, which is chosen by most system suppliers as the 100G long-haul transmission scheme.

DWDM technology has evolved to higher and higher modulation rates, including 1.25G NRZ, 2.5G NRZ, 10G NRZ, and 25G NRZ. Both 50G PAM4 and 100G PAM4 use high-order modulation PAM4, and so does the currently competitive DWDM coherent modulation technology, mainly for 200G and 400G, as well as future 800G high-bandwidth services.

The 50G SFP56 DWDM optical module adopts 50G PAM4 modulation on both the optical port side and the electrical port side and uses a DWDM EML laser at the transmitting end. With the support of DCM dispersion compensation and EDFA, it can meet the requirements of at least 80km transmission distance. The total bandwidth of a single fiber supports 96 waves x50G=4800G, and its product form with industrial-grade temperature can meet the needs of 5G front-haul systems.

The optical module using a 100G (2X50G PAM4) solution includes 100G QSFP28 DWDM (C-band, 50Ghz wavelength interval). It is usually called 100G PAM4 QSFP28 in the industry, and its optical port carries 100GE service by 2 different 50G DWDM wavelengths. The electrical-port side adopts 4X25G NRZ, while the optical-port side has two solutions: CS and LC interfaces. The CS interface adopts 4 optical fibers, 2 in and 2 out. The duplex LC interface scheme adopts WDM technology, and 2 optical fibers can make for transmission. With the support of DCM dispersion compensation and EDFA, it can meet the requirements of at least 80km transmission distance, and the total bandwidth of a single fiber supports 96 waves x50G=4800G.

With its advantages, PAM4 DWDM optical modules are usually used in 100G and 400G construction, such as point-to-point DCI, DWDM-based 100G Ethernet metro access, campus and enterprise links, and 5G mobile access architecture, etc. For data center DCI 80km~120km, 50G/100G DWDM technology based on high-order PAM4 modulation can compete with coherent 200G/100G DWDM technology for market share at a low cost. As shown in the table below:

QPSK is a multivariate (quaternary) digital frequency band modulation method. The sinusoidal carrier of its signal has 4 possible discrete phase states, and each carrier phase carries 2 binary symbols. PM-QPSK divides a single 100G signal into two 50G carrier signals with different polarization states and performs QPSK modulation on each carrier. Therefore, this method can reduce the channel baud rate to half. At the same time, since each polarization state can use 4 phases to represent bit information, it is possible to reduce the channel baud rate to half. Consequently, after PM-QPSK encoding, the baud rate can be reduced to a quarter of the bit rate.

The following is a schematic diagram of the PM-QPSK encoding method:

FEC technology is widely used in optical communication systems. Different FECs can obtain different system performances. According to the different processing methods of received signals, FEC can be divided into hard and soft-decision codes.

The hard-decision code is a decoding method based on the traditional error-correcting code viewpoint. The demodulator first makes the best hard decision on the channel output value. The FEC redundancy of the hard decision is about 7%, which has been widely used in the field of optical communication.

To reflect the degree of distance, it is necessary to divide the judgment space more finely. In addition to dividing the “0/1” threshold, the “0” and “1” spaces are also divided by the “confidence threshold” to illustrate the relative position of the decision point in the decision space. Compared with hard-decision, soft-decision contains more channel information. The decoder can make full use of this information through probabilistic decoding, to obtain greater coding gain than hard-decision decoding.

OIF recommends that 100G choose soft-decision forward error correction coding (SD-FEC) with the redundancy of less than 20%. In this case, the net coding gain can reach about 10.5dB. Using SD-FEC 100G technology can reach the same level of transmission distance as 10G.

Coherent detection detects intensity, phase, and frequency-modulated optical wireless signals. The optical signal is mixed with the local oscillator laser (LO) at the receiving end before entering the optical receiver, resulting in an intermediate frequency component equal to the difference between the frequency of the LO laser and the frequency of the original light source.

Compared with direct detection, coherent detection is prone to obtaining a large signal-to-noise ratio. It has more recoverable signal types, and better frequency selectivity, which is more suitable for DWDM systems. The digital coherent receiver maps all optical properties of the optical signal to the electrical domain through phase diversity and polarization diversity. It also uses mature DSP technology to achieve polarization demultiplexing and channel linearity damage compensation in the electrical domain. All these simplify the optical dispersion compensation and polarization demultiplexing design in the transmission channel to reduce and eliminate the dependence on optical dispersion compensators and low PMD fibers.

As shown in the figure, the continuous light output by the integrated tunable laser (ITLA) is sent to the QPSK modulator, which becomes two light waves after the PBS is generated by a polarization separation device in the modulator. Each polarized light is modulated by a QPSK modulator, and there are I and O signals generated by the MUX when modulating the signal. The broadband amplifier and driver amplify the I and O signals and apply them to the modulator to generate electro-optical modulation.

The modulated two QPSK signals are synthesized by a PBC and a PM-QPSK polarization multiplexed signal is output. For the QPSK modulator (Modulator), it is also necessary to carry out feedback control (MZ bias control) for the multiple bias points of the I, Q, and Pi/2 phase through closed-loop control, so that the QPSK modulator can work stably for a long time under normal bias state. In addition, the transmitting unit also encodes the service data to be transmitted through the SD-FEC encoder and inputs it into MUX(X) and MUX(Y). It generates 4-channel serial data using parallel-to-serial conversion and outputs it to the driver.

2) Basic principle of the receiving side

As shown in the figure below, the PM-QPSK optical signal is received by the coherent receiving unit of the optical module after long-distance transmission. The optical signal is divided into two mutually-orthogonal polarized optical signals by the polarization beam splitter, denoted as the X direction and the Y direction. The optical signals in the two directions are coherently mixed at 90 degrees (900Hybrid)with the corresponding local oscillator polarized light. The signal output by the mixing frequency undergoes photoelectric conversion through a balanced photoelectric detector and then is sampled and quantized by the ADC to complete the analog/digital conversion. Finally, the discrete digital sequence after sampling and quantization is sent to the DSP unit for processing.

In the DSP, the digital signal is synchronized by clock recovery processing. The polarization demultiplexing and the removal of CD, PMD, and partial nonlinear effect impairment are realized by electric domain equalization. The frequency difference between the local oscillation light source and the transmitting optical carrier as well as the effect of phase noise is eliminated by frequency offset estimation and corresponding judgment processing. The processed data is then sent to the SD-FEC decoder unit for decoding, and finally, the data signal is recovered.

3) The basic principle of the DSP algorithm

The following will introduce each unit in the block diagram: 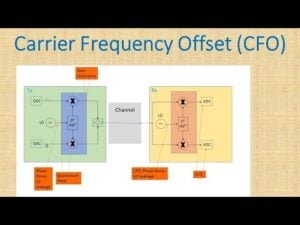 Due to the linewidth of the laser, some phase shift occurs near its true oscillation frequency. In consideration of the error of the frequency offset estimation, the phase offset of the symbol after the frequency offset estimation still exists. This offset changes with time, which can cover all ranges from 0 to 2π. The purpose of carrier phase recovery is to remove this part of the phase offset, so that the output symbol phase can be directly used for symbol decision. The basic principle of carrier phase estimation is that the unexpected phase offset of the information phase is obtained and removed from each symbol.

Technical features and advantages of the 100G system

As we all know, every increase in single-channel rate will be limited by transmission impairments including OSNR tolerance, chromatic dispersion, PMD, and nonlinearity. Therefore, more advanced technologies are required to reduce the impact of these transmission impairments. 100G integrates multiple technologies such as polarization multiplexing, phase modulation, super FEC, coherent detection, and DSP. The characteristics of the current 100G technology solutions are as follows:

< PreviousCore Technologies in 400G QSFP-DD AOC: PAM4 and DSP
Next >What is FTTR (Fiber to the Room)?
Scroll to Top