1. The concept of firewall

The firewall, also known as a protective wall, was invented by Check Point founder Gil Shwed in 1993 and introduced to the international Internet (US5606668(A) 1993-12-15). It is a network security system that sits between the internal network and the external network.

It is an information security protection system that allows or restricts the passage of transmitted data according to specific rules. 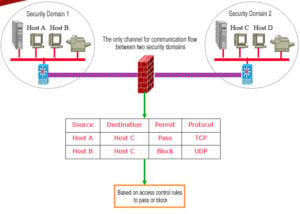 In the network world, it is the communication packets that carry the communication data that are filtered by the firewall. In the network, the “firewall” refers to a method of separating the intranet from the public access network (the Internet), which is actually an isolation technology. A firewall is a scale of access control implemented when two networks communicate, which allows people and data that you “agree” to enter your network while keeping people and data that you “disagree” with out, maximizing the chance of preventing hackers in the network from accessing your network. In other words, if you don’t through the firewall, people inside your company can’t access the Internet, and others on the Internet can’t communicate with people inside your company.

2. The history of firewall

Since its birth, firewall has gone through four development stages.

The common firewalls now are firewalls with secure operating systems, such as NETEYE, NETSCREEN, TALENTIT, etc.

3. The types of firewall

A network-level firewall can be considered as an IP packet filter that operates on the underlying TCP/IP protocol stack. It can be enumerated to allow only packets that match certain rules to pass through, while the rest are prohibited from passing the firewall (except for viruses, which cannot be prevented). These rules can usually be defined or modified by the administrator, although some firewall devices may only be able to apply the built-in rules.

The application firewall operates at the “application layer” of the TCP/IP stack, where the data streams you generate when using a browser or when using FTP belong. An application layer firewall intercepts all packets to and from an application and blocks others (usually by simply dropping them). In theory, this type of firewall can completely block the data flow from outside to the protected machine.

A database firewall is a database security system based on database protocol analysis and control technology. Based on an active defense mechanism, it realizes database access and behavior control, dangerous operation blocking, and suspicious behavior auditing. Through SQL protocol analysis, the database firewall allows legal SQL operations to pass and blocks illegal and non-compliant operations according to predefined prohibition and permission policies, forming the peripheral defense circle of the database and realizing active prevention and real-time audit of dangerous SQL operations. Database firewall provides SQL injection prohibition and database virtual patch package function in the face of the invasion from outside.

Linux firewalls are very useful in enterprise applications, examples are as follows.

5. The basic principle of firewall

Corresponding to the flow of byte transmission in the figure below, it can be divided into the following layers: 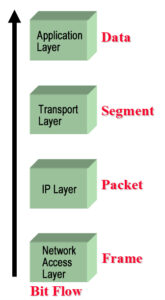 Netfilter is a Linux 2.4 kernel firewall framework proposed by Rusty Russell, which is both simple and flexible and can implement many functions in security strategy applications. Such as packet filtering, packet processing, ip masquerading, transparent proxy, dynamic Network Address Translation (NAT), as well as user and Media Access Control (MAC) address-based filtering and state-based filtering, packet rate limiting, etc. These rules of Iptables/Netfilter can be flexibly combined to form a very large number of functions and cover various aspects, all thanks to its excellent design ideas. The Netfilter/Iptables packet filtering system can be treated as a whole, with netfilter as a kernel module implementation and iptables as a tool for upper-level operations. Without a strict distinction, in Linux both netfilter and iptables can be considered to refer to the Linux firewall. In fact, Iptables is a tool that manages kernel packet filtering and can be used to configure rules in the kernel packet filtering form. It runs in user space.

The difference is that netfilter is a new packet filtering engine introduced in the Linux 2.4 kernel, called Netfilter, which refers to the internal structure of the packet filtering firewall in the Linux kernel, not in the form of programs or files, and belongs to the “kernel state” firewall function system. iptables refers to the command program used to manage the Linux firewall, usually located in /sbin/iptables, which is part of the “user state” firewall management system. iptables is the tool that controls Netfilter, the older sibling of the command ipchains in the Linux 2.2 kernel. The iptables is the tool that controls Netfilter and is the older sibling of the ipchains command in the Linux 2.2 kernel.

What is the connection between iptables and netfilter?

Many people immediately think of iptables as a firewall, but in fact iptables is not a firewall, it is just software or a tool that can write certain rules and save the written rules to netfilter’s rule database. Therefore, the real “fire prevention” is Netfilter, not iptables. netfilter is a framework in the kernel, which contains four tables and five chains, and these chains contain a lot of rules. The rules that the packets are compared to are the rules defined in this chain.

In the following, we will refer to the Linux firewall as iptables. 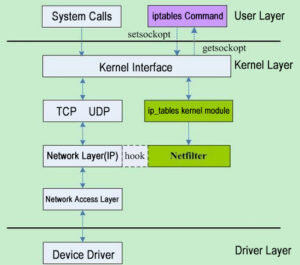 7. The performance of firewall

Throughput: This metric directly affects the performance of the network.

Packet loss rate: the percentage of frames that should be transmitted by network devices under steady-state load, but are dropped due to lack of resources.

Back-to-back: Starting from the idle state, a significant number of fixed-length frames are sent at a transmission rate that reaches the minimum legal interval limit of the transmission medium. The number of frames sent when there is a loss of the first frame.

Simultaneous Browser Connections: The maximum number of simultaneous connections that can be established between hosts passing the firewall or between a host and the firewall.

8. The limitation of firewall

Although the firewall is a basic facility to protect network security, it also has some security threats that are not easy to prevent: first of all, the firewall cannot prevent attacks that do not pass through the firewall or bypass the firewall. For example, some users may form a direct connection to the Internet if they are allowed to dial out from inside the protected network. Firewalls are based on packet header information detection and blocking methods, mainly access control of services provided or requested by hosts, and cannot block harmful traffic flowing through open ports, and are not a solution to worms or hacking attacks. In addition, it is difficult for firewalls to prevent attacks or abuses from within the network.

< PreviousHow to Use DSP in Coherent Optical Communication？
Next >How to Use Fiber Jumper?
Scroll to Top