Edgecore is not as well-known as the big names in networking equipment such as Cisco and Juniper. It is a subsidiary of Accton, which is an internationally renowned ODM manufacturer of network products. It is positioned as an “affordable and good network” and is very popular with “good products, good prices, and good services”. Therefore, when AWS, Facebook, and other ultra-large Internet manufacturers are collectively exerting their efforts in the field of white box switching to reduce operating costs, Edgecore and Accton find their place.

The Edgecore AS7712-32X white box switch is a typical box switch device, and most of its front panel is occupied by 32 QSFP28 100GbE ports. In addition to that, on the right side of the front panel, it provides necessary ports on a box switch: a Console port, an out-of-band management port, and a USB port. 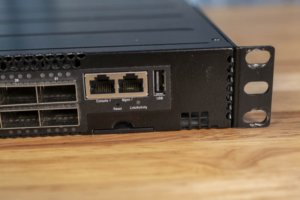 The management port begins to provide out-of-band management functions for the switch after the NOS is installed.

The back design of the Edgecore AS7712-32X white-box switch is very simple, including six hot-swappable fans and two primary power modules. Six hot-swappable fans can realize a 5+1 redundant backup function, even if one is broken, it can be replaced without affecting the heat dissipation of the system. Each primary power supply module can provide enough power for the system, and two power supply modules constitute a 1+1 redundant backup.

The Back of the Edgecore AS7712-32X White Box Switch

Open the top cover of the Edgecore AS7712-32X chassis, except for the components that can be seen on the front and rear panels, there are only 3 PCBs and air guides inside the chassis. The design is very simple. 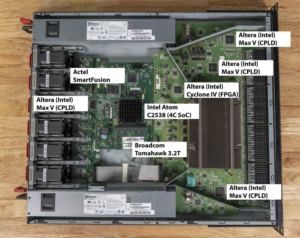 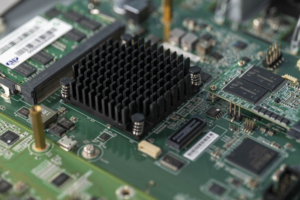 The switchboard is only responsible for the data packet processing of 32 100GbE QSFP28 ports, and the management part of the device is on the COMe CPU board. Edgecore uses an Intel Atom C2358 CPU to manage the entire device. As an SoC CPU of the Atom C2000 series, C2358 has 4 cores, a 2.4GHz main frequency, and low power consumption of 15W TDP. The Atom C2000 series processors were released by Intel in 2013, so the C2358 is only equipped with DDR3 memory and does not support the latest DDR4 memory. 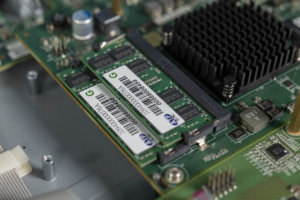 As an embedded x86 motherboard, in addition to memory bars, the COMe board also provides a 64GB mSATA SSD module to provide additional storage space. 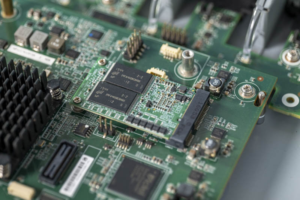 The COMe module with CPU is buckled on the last PCB in the chassis. The PCB connected to the hot-swappable fan is mainly used to monitor and diagnose the running status of the fan. Edgecore made an interesting design here, pairing each hot-swappable fan with LED light guides. Light guide strips are usually found on the IO ports on the front panel where there are a large number of IO ports. Once an IO port fails, the on-site maintenance personnel can quickly locate the fault point by identifying the light on and off. Edgecore applies this design to hot-swappable fans, which can also facilitate the replacement and maintenance of fans by on-site maintenance personnel. 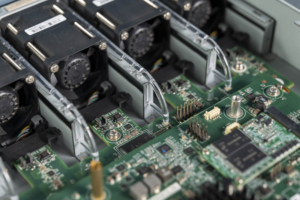 Light guides on the Edgecore AS7712-32X fan monitor board

The design of PCB with three independent functions makes the Edgecore AS7712-32X very expandable. By replacing the COMecan, Edgecore can expand its product line by providing users with Intel Xeon-D CPUs with enhanced scheduling capabilities. On the other hand, the concise PCB design form can further reduce the overall cost of the box switch, to better compete with brand switches in the market.

With the standardization of server equipment, the white-boxing of network equipment is an important direction for the development of ultra-large-scale data centers and cloud computing manufacturers in the field of hardware infrastructure in recent years. Due to the huge number of deployments, the cost can be greatly reduced by white-boxing of network equipment. On the other hand, white-box hardware devices can allow operation and maintenance and business-based function development to be in the hands of cloud computing manufacturers so that they can respond to market demands faster. In addition to Edgecore, Delta and other manufacturers have also launched white box network equipment at the OCP conference. It is believed that members of the OCP organization will foster developments in open source and white box devices in the near term.

< PreviousLayer 3 Switch vs. Router
Next >What is an aggregation switch?
Scroll to Top