QSFP-DD vs OSFP vs QSFP56 vs QSFP: advantages and challenges

5G, Internet of Things (IoT), and growing video-based data transport place heavy pressure on carriers and data centers to upgrade their network capacity to support these data-intensive applications. In addition, recent behavioral changes brought on by the COVID-19 pandemic such as remote working, remote learning, and increased streaming for entertainment will continue well after this health crisis ends. As the explosion in the capacity demands of data-hungry applications outpaces current high-speed transport abilities, 400G is a promising new technology that supports an immediate need in fiber optics with comparatively low operational expenses (OPEX) and a smaller footprint.

The system port densities are identical between QSFP-DD and QSFP28 module specifications. However, since each QSFP-DD port can accommodate 8 lanes instead of 4, QSFP-DD doubles the number of ASIC ports it supports for existing interfaces such as CAUI-4. QSPF-DD provides the highest BW density of any pluggable module.

The BW density of QSFP-DD

In summary, 400G QSFP-DD is a little longer than QSFP+/QSFP28 but the port density is the same, and the bandwidth is increased to 10 times or 4 times of the latter, and it is backwards compatible, which means customers can skip the QSFP system and directly deploys the QSFP-DD system, which greatly reduces the equipment costs.

First, let’s take a look at OSFP transceiver. The 400G OSFP is a new pluggable form factor with eight high-speed electrical lanes that will initially support 400Gb/s (8x50G). It is slightly wider and deeper than the QSFP but it still supports 36 OSFP ports per 1U front panel, enabling 14.4Tb/s per 1U. Actually, there is not much difference between these two form factors. For example, let’s compare QSFP-DD DR4 with OSFP DR4. The OSFP DR4 is a 400Gb/s Octal Small Form-factor Pluggable (OSFP) optical module designed for 500m optical communication applications. The module incorporates 4 parallel channels on 1310nm center wavelength, operating at 100G per channel. The transmitter path incorporates a quad-channel EML driver together with 4 parallel EMLs. While the QSFP-DD DR4 also supports a max transmission distance of 500 meters on 1310nm center wavelength. But the different part is that the QSFP-DD DR4 module converts 8 channels of 50Gb/s (PAM4) electrical signal into 4 channels of parallel optical output data, each capable of 100Gb/s data rate for an aggregated bandwidth of 400Gbls. 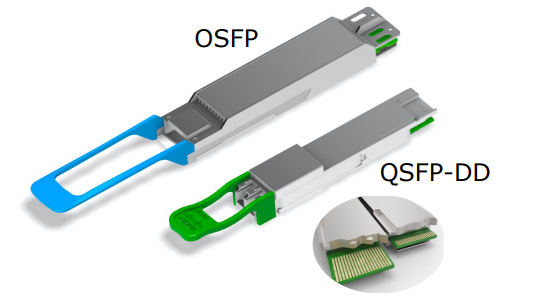 The CFP series started from CFP, went to CFP2, then to CFP4, and finally to CFP8, which is also a long-established form-factor series. Compared to the QSFP series, the CFP series seems to have been less popular, for obvious reasons — large size and high power consumption.

Compare QSFP-DD and CFP8, the first obvious thing is the size — the size of CFP8 (41.5mm*107.5mm*9.5mm) is significantly larger than QSFP-DD, and the volume is more than three times that of QSFP-DD.

As an evolution of the previous 40G QSFP+ and 100G QSFP28, Quad 50 Gigabits Small Form-factor Pluggable (QSFP56) is the one designed for 200G Ethernet. QSFP56 denotes 4 x 50 to 56Gb/s in a QSFP form factor. Sometimes it can also be referred to as 200G QSFP for sake of simplicity. QSFP56 optical modules are similar to QSFP ones in terms of size and form factor. Generally, two QSFP56 modules can be used with an SMF or MMF to realize a 200G link.

The latest iteration of the optical module form factor is from QSFP56 to QSFP56-DD, which is also called 400G QSFP-DD. Though QSFP56-DD has a double density, its size is similar to QSFP56. 400G QSFP56-DD port is backward compatible with the QSFP transceiver which means as long as the switch supports, QSFP56 can work on the QSFP56-DD port. When using a QSFP56 module in a QSFP56-DD port, this port will be configured for a data rate of 200G, instead of 400G.

Higher speeds and the utilization of PAM4 modulation do bring great improvements in throughput but also result in high complexity at the physical layer, and it causes signal transmission errors easily.

At the same time, the complex of the 400G transceiver test also brings new challenges for the optical module vendors. To ensure the transceiver quality for users, vendors have to attach great importance to the transceiver test equipment and R&D technical. How to make sure the new products support the 400G upgrade while dampening associated development and manufacturing test costs that can hamper competitive pricing models, is what they should deal with.

< PreviousHow do these countries develop 5G under the COVID-19 crisis?
Next >What is InfiniBand network and the difference with Ethernet?
Scroll to Top