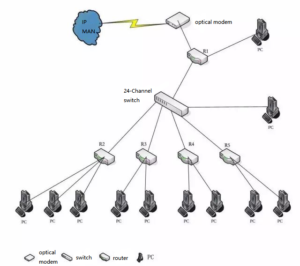 Some intermediate devices (or intermediate systems) are used when connecting networks, which is called a relay system in ISO terms. There can be the following five types of relay systems depending on the level of the relay system: 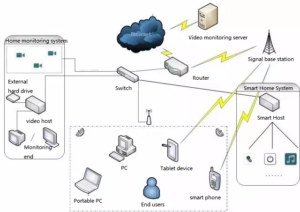 “Switch” is the word with the highest frequency in today’s network. From bridge to route to ATM to telephone system, it can be applied in any situation. The word switch first appeared in telephone systems, specifically referring to the switch of voice signals between two telephones. The equipment that completes the work is a telephone switch. the switch is a technical concept, that is, to complete the forwarding of signals from the device inlet to the outlet. Therefore, all devices that meet this definition can be called switch devices. 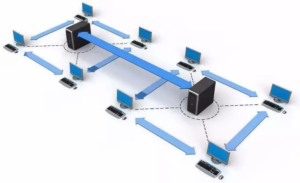 The process of switching

The Ethernet switch we often talk about is a multi-port second-layer network device based on bridge technology. It provides a low-latency and low-overhead path for forwarding data frames from one port to another. Thus, there should be a switching matrix at the internal core of the switch, providing a path for communication between any two ports, or a fast switching bus, so that the data frame received by any port is sent from other ports.

The function of the exchange matrix is often completed by a special chip (ASIC) in equipment. In addition, the design idea of Ethernet switches has an important assumption, that is, the speed of the exchange core is so fast that the usual large-flow data will not make it congested. In other words, the ability to switch is infinitely large compared to the amount of information transmitted (in contrast, the idea of ATM switches in design is that the ability to switch is limited relative to the amount of information transmitted).

Although Ethernet Layer 2 switch was developed based on multi-port bridges, rich features of switching not only make it the best way to obtain more bandwidth, but also make the network easier to manage.

The router is a packet switching device (or network layer relay device) in the network layer of the OSI protocol model. The basic function of the router is to transmit data (IP packets) to the correct network, including: 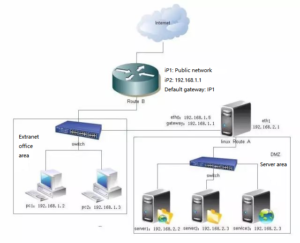 In the regional network, the main function of the router is network connection and routing. It connects the lower-level basic network units-the campus network and is responsible for data forwarding between the lower-level networks.

The main role of routers is to separate subnets inside the campus network. The early Internet infrastructure was the local area network (LAN), in which all hosts were on the same logical network. As the size of the network continues to expand, the LAN evolves into a campus network consisting of multiple subnets connected by high-speed backbones and routers. Among them, multiple subnets are logically independent, and the router is the only device that can separate them. It is responsible for packet forwarding and broadcast isolation among subnets, and the router on the border is responsible for the connection with the upper-layer network.

The main differences between a Layer 3 switch and a router

The most fundamental reason why we can’t distinguish between a layer 3 switch and a router is that the layer 3 switch also has a “routing” function. Despite this, there are quite a few essential differences between Layer 3 switches and routers:

1) The main functions are different.

The same is true for a Layer 3 switch. It is just a switch with some basic routing functions, and its main function is data exchange. While the router only has one main function of routing and forwarding.

2) The main applicable environments are different

The routing function of the Layer 3 switch is relatively simple because it mainly faces simple LAN connections. Because of this, the routing function of a Layer 3 switch is simple, and the routing path is far less complex than that of a router. Its main purposes in the local area network are to provide fast data exchange and meet the application characteristics of frequent data exchange in the local area network. The router is different. It was originally designed to realize different types of network connections. Although the router is also applicable to the connection between local area networks, it is mainly used between different types of networks, such as the connection between the LAN and wide area networks.

The main function of a router is routing and forwarding, and its ultimate purpose is to solve the connection of various complex routing networks. Therefore, it has a powerful routing function, which is not only suitable for LANs with the same protocol, but also between LANs and WANs with different protocols. Its advantages lie in choosing the best route, load sharing, link backup, and exchanging routing information with other networks.

3) The performance is different.

Technically, routers and Layer 3 switches have distinct differences in packet switching operations. Routers perform packet switching by microprocessor-based software routing engines, while Layer 3 switches perform packet switching by hardware. After the Layer 3 switch routes the first data flow, it will generate a mapping table between MAC addresses and IP addresses. When the same data flow passes through again, it will directly pass through Layer 2 according to this table instead of routing again. In doing so, the switch eliminates the network delay caused by the router’s routing selection, and thus improves the efficiency of data packet forwarding.

At the same time, the route lookup of the three-layer switch is aimed at the data flow. It uses cache technology and can be easily realized by the ASIC technology, which can greatly save the cost and realize fast forwarding. The forwarding of the router adopts the longest matching method, which is complicated to implement and usually implemented by software, with low forwarding efficiency. Because of this, the overall performance of Layer 3 switches is much better than that of routers, thus it is very suitable for LANs with frequent data exchanges.

Although routers have powerful routing functions, their packet forwarding efficiency is far lower than that of Layer 3 switches. They are more suitable for the interconnection of different types of networks where data exchange is not frequent, such as the interconnection of local area networks and the Internet. It will be a waste (in terms of its powerful routing function) if routers, especially high-end routers, are used in local area networks. It cannot meet the communication performance requirements of local area networks well, thus affecting the normal communication of inter-subnet.

To sum up, there are still essential differences between layer 3 switch and router. Overall, it is better to use a layer 3 switch for multi-subnet connection in the LAN, especially in an environment where data exchange between different subnets is frequent. On the one hand, it can ensure the communication performance requirements between subnets. On the other hand, it saves the investment in purchasing routers. Of course, it is understandable to use routers if the communication between subnets is not very frequent, which can also achieve the purpose of secure isolation and mutual communication between subnets. The details should be determined according to actual needs.

The past and present of layer 3 switch

The most important purpose of the layer 3 switch is to speed up the data exchange within a large local area network. The routing function has also served this purpose. It can achieve one route and multiple forwarding. For regular processes such as data packet forwarding, it is implemented by hardware at high speed, while functions such as route information update, route table maintenance, route calculation, and route determination are implemented by software.

For the sake of security and convenient management, mainly to reduce the harm of broadcast storms, large local area networks must be transformed into small local area networks according to factors such as functions or regions. This makes VLAN technology widely used in the network. Communication between different VLANs must be forwarded through routers. Due to the limited number of ports and slow routing speed, the scale and access speed of the network are limited simply by using routers to realize inter-network access.

Based on this situation, the layer 3 switches came into being. Layer 3 switch is designed for IP and has a simple interface type. It has strong layer 2 packet processing capability and is very suitable for data routing and switching on large LAN. The switch can not only work in the third layer of the protocol to replace or partially complete the functions of traditional routers but also has the speed of layer 2 switchings, at a relatively cheap price.

Most of the routing functions of the layer 3 switches are for data interaction, so their routing functions are not as strong as those of professional routers of the same grade. After all, there are still many deficiencies in security and protocol support, which cannot completely replace the work of routers.

To sum up, switches are generally used for LAN-WAN connections. Switches are attributed to bridges and are devices at the data link layer. Some switches can also realize the switching of the third layer. Routers are used for the connection between WAN-WAN, which can solve the problem of forwarding packets between heterogeneous networks and act on the network layer. In comparison, routers are more powerful than switches, but they are slower and more expensive. Layer 3 switches are widely used because of the ability to forward messages at wire speed and the good control function similar to routers’.