Is it Possible for Optical Transmission Beyond C and L Band?

In optical transmission, we often explore the expansion of the spectrum in the hope of increasing the capacity of optical transmission systems. The largest spectral ranges that are currently commercially available are the C and L bands, and the extended C++ and L++ bands, which can reach a maximum spectral width of 12 THz. As shown in the figure, these bands are basically in the minimum range of fiber attenuation.

Because in these optical fiber attenuations of the most minor place, can make our network cost the lowest, or more accurately, the construction cost of the optical layer is optimal. (Components of fiber optic loss and how to reduce it?)

In addition to the cost of wave combining and distributing/WSS, solutions for the optical layer usually focus on the following aspects:

When the transmission distance is over 100km, we use EDFA to compensate for the attenuation caused by the fiber. However, when the attenuation of the fiber optic line exceeds this range, we usually use Raman amplifiers to increase the transmission capacity for longer distances. Raman has a higher amplification capacity and can also introduce less noise. However, Raman is more expensive, and its Opex for opening and maintenance is much higher than ordinary EDFA.

For relay regeneration, if the fiber attenuation is too much, we need to set more amplifiers between stations at the same distance, and the accumulation of amplified spontaneous emission (ASE) noise generated by the amplifiers. This also increases the number of spans, so that the wavelengths need to penetrate more wave combining and distributing/WSS veneers. As a result, the performance of OSNR is reduced, so more relay boards should be added to realize 3R and other functions at the design stage, ultimately resulting in excessive Capex.

Therefore, in general, we will try to choose the least attenuated fiber band when choosing the band to carry the signals. This is why the current mainstream manufacturers choose to do it in the C / L band.

So what other ranges of the spectrum can we develop for light transmission besides C and L? In the picture at the beginning of the article, in addition to C and L, there are longer wavelength U-band and shorter wavelength O/E/S-band.

For the longer wavelength U-band. It faces the problem that bending loss has a greater effect on longer wavelengths. In the figure below, the optical mode becomes smaller and lossier with increasing wavelength at the same bending radius. 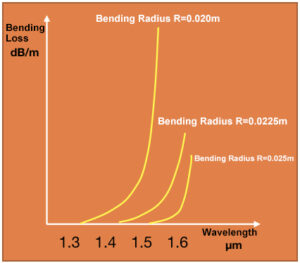 Of course, it is not infeasible to transmit in U-band, which requires us to develop optical fibers with better bending resistance, such as photonic crystal fibers. It just doesn’t quite fit at the current stage with the mainstream trend and universal application of optical fibers.

In this case, can we choose in the shorter wavelength range such as O/E/S?

Let’s take a look at the fiber transmission performance metrics within these wave bands, which are also commonly used to evaluate optical systems.

For fiber attenuation, due to water-peak loss, Rayleigh scattering and the ultraviolet loss, the fiber attenuation in these individual bands is much higher than in the C/L band range, thus increasing the need for amplifiers to solve the fiber attenuation. Amplification techniques based on alternative rare earth elements or extended Raman amplifiers have also been experimentally validated, and the following figure shows the types of amplifiers with different elements. 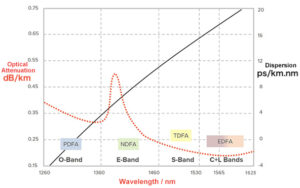 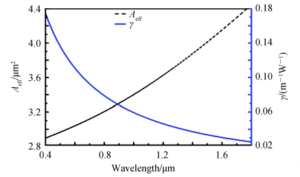 In addition, the dispersion brought by the fiber and the effect on different wavelengths is also a factor in the system nonlinearity index. At 100G and super 100G rates, the problem of dispersion has been well solved by electric domain compensation.

Therefore, for different ranges of wavelengths, we are not afraid of having dispersion but are concerned about too little or even no dispersion. Because smaller dispersion or zero dispersion will bring very serious Kerr effect (nonlinear effect). The following figure shows the dispersion variation for different fiber types. 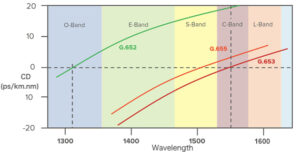 Above we only briefly mentioned the attenuation and nonlinearity of the development of shorter wavelengths must be considered, the commercial cost of commercial maturity after the technology verification is also an important consideration.

Back to the beginning, in fact, the exploitation of shorter wavelengths is already being implemented, for example, the C++ and L++ bands are actually extended to utilize about 10nm of spectrum in the S and L bands. It is believed that in the near future, spectrum resources beyond C and L will be exploited for optical transmission.