With the rapid development of optical communication and interconnection network in recent years, users’ demand for networks has also surged in line with the trend, which has led to the traffic of telecom backbone networks are growing at a rapid rate of 50% to 80% per year. In order to meet the needs of users, the transmission rate of optical communication also increased development, from the previous 10G, 25G, 40G development to today’s 100G, 200G, 400G, etc. Although 100G optical modules have become the mainstream of the market, the requirements for bandwidth, port density, and the amount of energy consumed by the system are still increasing, which further drives the technology to 200G, 400G or higher speed systems. This article will provide a detailed introduction to 200G optical modules and bring you to know this rising star.

Currently, there are two main types of 200G optical modules: 200G QSFP56 and 200G QSFP-DD. First, as an evolution of the 40G QSFP+ and 100G QSFP28, the QSFP56 (Quad 50 Gigabits Small Form-factor Pluggable) is designed specifically for 200G Ethernet. QSFP56 denotes 4 x 50 to 56Gb/s in a QSFP form factor. Compared with QSFP+ and QSFP28, the QSFP56 form factor as a 200G QSFP supporting 4 x 50G channels can achieve higher network speeds. The most important change from QSFP+ and QSFP28 to QSFP56 is that QSFP56 changes from NRZ encoding to PAM4 encoding. QSFP56 optical modules are available in two main package forms: QSFP56 SR4 and QSFP56 FR4.

There are two technical directions for 200G optical modules, one is a 4x50G PAM4 network in the QSFP56 package; the other is an 8x25G NRZ network in the QSFP-DD package. In short, NRZ (non-return to zero) is a modulation technology with two voltage levels to represent logic 0 and logic 1. The voltage literally does not “return to zero”; logic 0 is a negative PAM4 that uses four voltage levels to represent four combinations of 2 bits logic: 11, 10, 01 and 00.

200G QSFP-DD LR4 converts the 8-channel of 25Gb/s or 4-channel of 50Gb/s electrical input data into LWDM optical signals. It contains a duplex LC connector for the optical interface and a 76-pin connector for the electrical interface. To minimize the optical dispersion in the long-haul system, single-mode fiber (SMF) has to be applied in this module. Host FEC is required to support up to 10km fiber transmission. 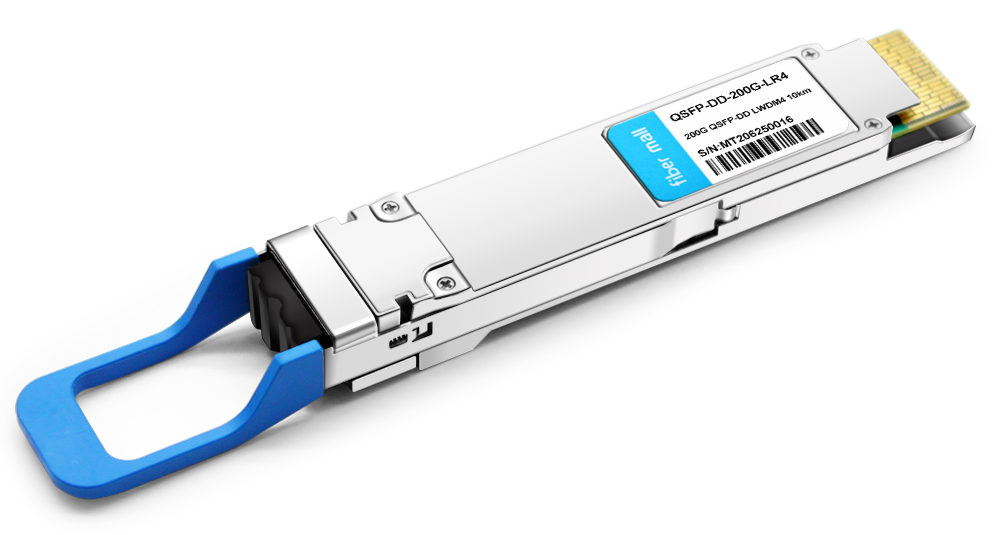 The module incorporates 4 independent channels on LWDM4 1295.56, 1300.05, 1304.58 and 1309.14nm center wavelength, operating at 50G per channel. It contains a duplex LC connector for the optical interface and a 76-pin connector for the electrical interface. To minimize the optical dispersion in the long-haul system, single-mode fiber (SMF) has to be applied in this module. It can support up to 30km with 200G FEC and 40km with built-in PFEC. 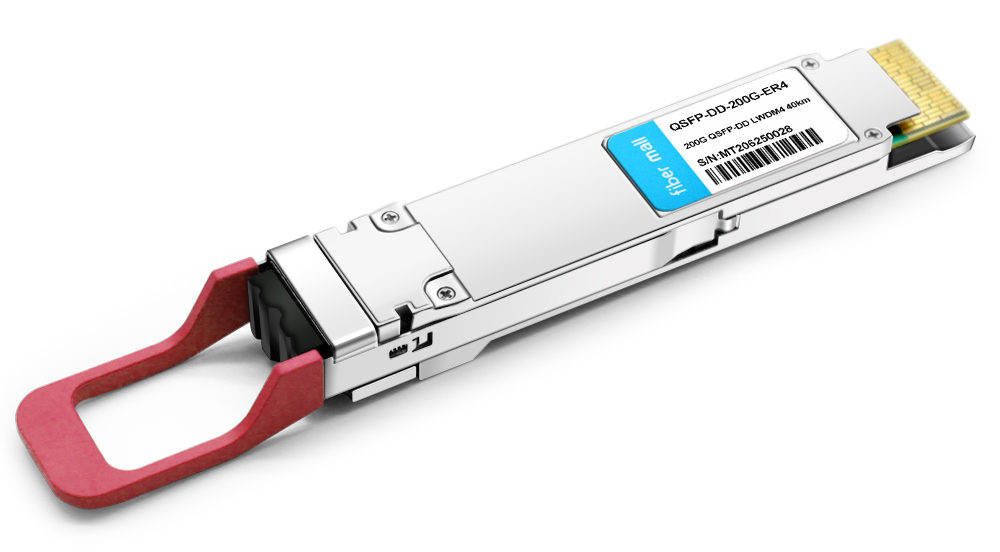 The QSFP56 SR4 full-duplex optical module offers 4 independent transmit and receive channels, each capable of 53.125Gb/s operation for an aggregate data rate of 200Gb/s on 70 meters of OM3 multi-mode fiber. An optical fiber cable with an MTP/MPO-12 APC connector can be plugged into the QSFP56 SR4 module receptacle. The central wavelengths of all 4 parallel lanes are 850nm. It contains an optical MPO-12 APC connector for the optical interface and a 38-pin connector for the electrical interface. 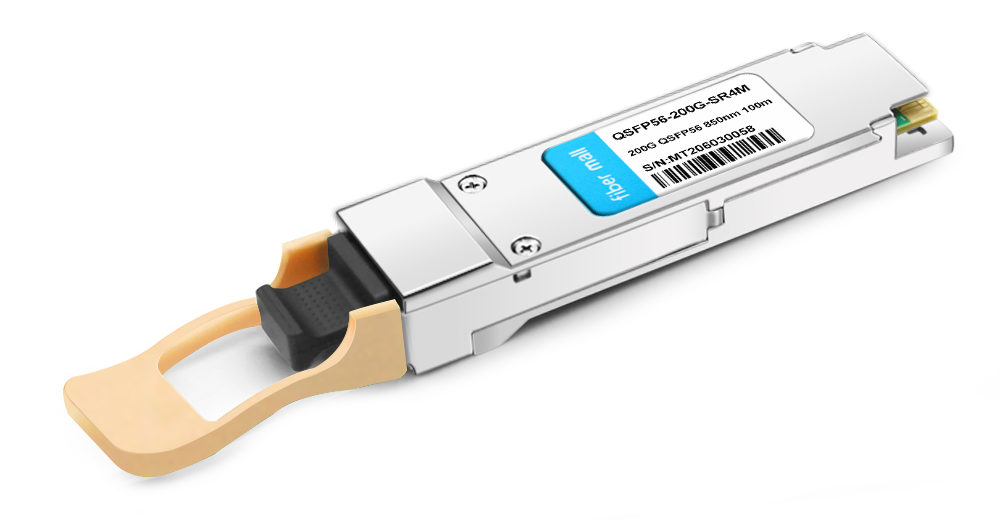 The 200G FR4 module converts the 4-channel 200Gb/s(PAM4) electrical input data into CWDM optical signals (light), by a driven 4-wavelength EMLs. The central wavelengths of the 4 CWDM channels are 1271, 1291, 1311, and 1331 nm as members of the CWDM wavelength grid defined in ITU-T G.694.2. It contains a duplex LC connector for the optical interface and a 38-pin connector for the electrical interface. It is designed for 2km optical communication applications. 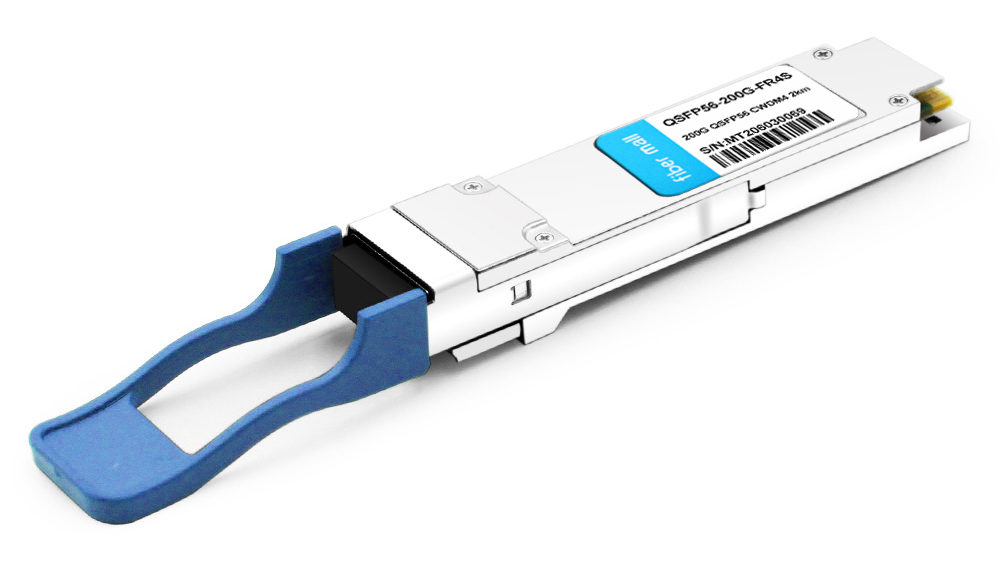 Schematic diagram of the PHY layer structure of the NRZ solution

The electrical interface name of the 200G NRZ solution is 200GAUI-8, with 8 channels and a single-channel rate at 26.5625Gbps. 200GAUI-8 is applied between PMA and PMA. The PMA part of the transceiver is a gearbox chip or a retimer chip, which can resample the signal to eliminate the influence of jitter and noise.

Schematic diagram of the PHY layer structure of the PAM4 solution

The electrical interface of the 200G PAM4 solution is 200GAUI-4, the number of channels is reduced by half compared to the NRZ solution, and the single-channel rate is 26.5625GBd. Like 200GAUI-8, 200GAUI-4 is also used between PMA and PMA. The PMA part of the transceiver is a gearbox chip or a retimer chip, which can resample the signal to eliminate the influence of jitter and noise.

In addition to the type of electrical interface between PMA and PMA, the specification also defines the number of channels and signal rates for optical transmission at the single-mode PMD layer, so there will be many different types of interfaces between PMA and PMD.

The basic principle of single-mode 200G Ethernet is based on a variant of the 400G Ethernet specification, especially reflected in its use of 50 Gbps transmission in PAM4 and definition of 200Gbase-DR4, 200Gbase-FR4, and 200Gbase-LR4.

In order to match the transmission type of PMD, the signal type between PMA and PMD of 200Gbase-DR4 is also PAM4, which can be matched with 200GAUI-8 or 200GAUI-4 interfaces.

If the 200Gbase-DR4 is matched with a 200GAUI-4 electrical interface (PAM4), the PMA part inside the transceiver is a 4-way PAM4 Retimer.

If the 200Gbase-DR4 is matched with a 200GAUI-8 electrical interface (PAM4), then the PMA part inside the transceiver will be an 8-way NRZ to 4-way PAM4 Gearbox.

200Gbase-FR4 is similar to 200Gbase-LR4 and DR4 in that they all use a single-mode wavelength division multiplexing scheme, which combines four optical paths with different wavelengths into one and sends it out. Also in order to match the transmission type of PMD, the signal type between PMA and PMD is PAM4, which can be matched with 200GAUI-8 or 200GAUI-4 interfaces. If the 200Gbase-FR4/DR4 is matched with a 200GAUI-4 electrical interface, the PMA part inside the transceiver will be a 4-way PAM4 Retimer.

If it is matched with a 200GAUI-8 electrical interface (PAM4), the PMA part inside the transceiver will be an 8-way NRZ to 4-way PAM4 Gearbox.

In 2020, the large-scale application of online services promoted by COVID-19 brought new growth opportunities to the data center market and accelerated the upgrading and updating of data center technology. New applications such as 4K HD video, live streaming, and VR have promoted the rapid growth of network traffic and the demand for emerging applications such as cloud computing, IAAs services, and Big Data, which puts forward higher requirements for internal data transmission in the data center. Therefore, higher bandwidth transmission such as 200G or 400G is being realized in the data center. IEEE (Institute of Electrical and Electronics Engineers) standardized 200G and 400G, especially for DCN(Data Communication Network). 400G was approved by IEEE 802.3bs Ethernet standard as early as 2017 and was originally proposed in 2013. On the other hand, 200G was approved in 2018, and the initial proposal appeared in 2015. 200G and 400G have almost the same standards and requirements, but the 400G optical transceiver is not widely used in the market. And for 200G optical modules, there are not many manufacturers who can provide them either, Fiber Mall is an exception. For the data center, upgrading from 100G to 200G is the best solution at this stage. The technology of 200G is more mature than 400G. Due to the competition between OEM (Original Equipment Manufacturer) and third-party module manufacturers, it also provides more options for 200G optical modules and reduces its purchase cost. Therefore, a data center with a tight budget can postpone the more expensive 400G upgrade to later and adopt the intermediate scheme of 200G first. Fiber Mall can provide you with high-quality 200G optical modules, including full series of 200G QSFP56 transceivers, QSFP56 AOC, 200G QSFP-DD transceivers, and QSFP-DD AOC.

< PreviousCompatible vs Original Optical Transceivers: which one is better?
Next >400G optical transceivers: detailed introduction of types and application
Scroll to Top