What is InfiniBand network and the difference with Ethernet?

What is InfiniBand network?

The InfiniBand architecture brings fabric consolidation to the data center Storage networking can concurrently run with clustering, communication and management fabrics over the same infrastructure, preserving the behavior of multiple fabrics. 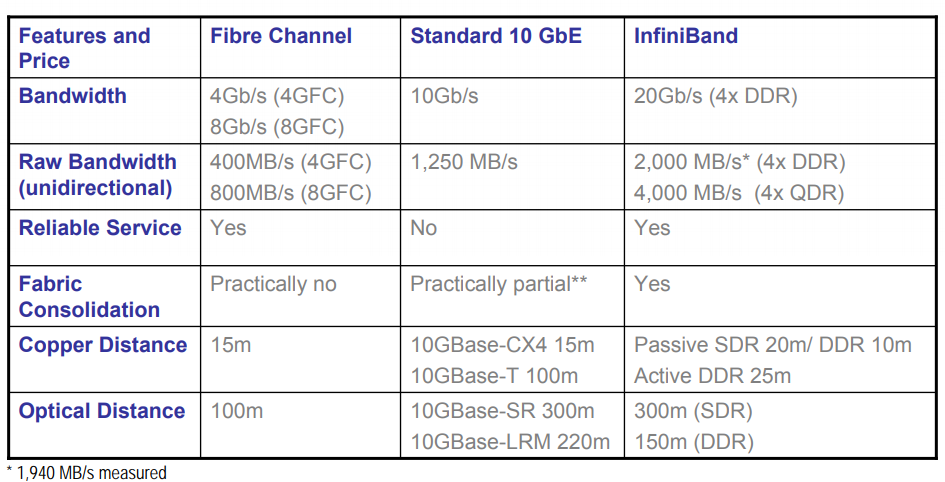 At present, the latest InfiniBand product is the HDR produced by mellanox, which can provide end-to-end bandwidth of up to 200gbps for the network, bring unparalleled network experience for high-performance computing, artificial intelligence and other fields, and maximize the computing potential in the cluster.

As for the 200G InfiniBand cabling, the final piece of the Mellanox 200Gbs solution is its line of LinkX cables. Mellanox offers direct-attach 200G copper cables reaching up to 3 meters and 2 x 100G splitter breakout cables to enable HDR100 links, as well as 200G active optical cables that reach up to 100 meters. All LinkX cables in the 200Gb/s line come in standard QSFP56 packages.

What are the advantages of InfiniBand network?

– Virtual Lanes at the link level

What is Ethernet network?

Ethernet refers to the baseband LAN specification standard created by Xerox company and jointly developed by Xerox, Intel and DEC company. The general Ethernet standard was issued on September 30, 1980. It is the most general communication protocol standard adopted by the existing LAN. It transmits and receives data through cables. Ethernet network is used to create local area network and connect multiple computers or other devices such as printers, scanners, and so on. In a wired network, this is done with the help of fiber optic cables, while in a wireless network, it is done through wireless network technology. The main types of Ethernet networks are Fast Ethernet, Gigabit Ethernet, 10-Gigabit Ethernet and Switch Ethernet.

At present, the IEEE 802.3 Standard Organization organized by IEEE has issued Ethernet interface standards of 100GE, 200GE and 400GE. Ethernet network is the transmission technology with the highest rate at present.

InfiniBand vs Ethernet: what’s the difference?

As interconnection technologies, InfiniBand and Ethernet have their own characteristics and differences. They are developing and evolving in their different application fields, and have become two indispensable Interconnection Technologies in our network world.

In terms of Ethernet network, along with the IP technology, they constitute the cornerstone of the whole Internet building in the world. All people and intelligent devices rely on Ethernet to realize the interconnection of all things, which is related to the original intention of its design to achieve better compatibility. It can make different systems better interconnected, which makes Ethernet have very strong adaptability since its birth. After decades of development, it has become the standard of the Internet.

In terms of InfiniBand network, it is an interconnection standard to solve the data transmission bottleneck in high-performance computing scenarios. It has been positioned as a high-end application since its formulation. Interconnection is not the main contradiction, and high-performance communication is the main entry point. Infiniband is a newer type of connection that was recently released. The great thing about it is the speed that users are provided with. While the speed for your connection will ultimately depend on what wire you choose, the speeds for them can go up to 40Gbps or evermore.

Therefore, compared with Ethernet technology, InfiniBand is inherently different from Ethernet due to different positioning, mainly in bandwidth, delay, network reliability and networking mode. InfiniBand directly creates a private and protected channel between nodes through switches to transmit data and messages without CPU participating in remote direct memory access (RDMA). One end of the adapter is connected to the CPU through the PCI Express interface, and the other end is connected to the InfiniBand subnet through the InfiniBand network port. Compared with other network communication protocols, this provides obvious advantages, including higher bandwidth, lower latency and enhanced scalability.

< PreviousQSFP-DD vs OSFP vs QSFP56 vs QSFP: advantages and challenges
Next >100G OTN: a future trend in IDC backbone network construction
Scroll to Top